Jim West, Desperado, rough rider, no you don’t want nada. No Mr. Smith we do not. The west is more than just wild, it is also weird. It is full of cryptids, pigmen, witches, shadows and anything else you could probably imagine. If this sounds like the description of the Skinwalker Ranch in Utah, you would be right. However, it is also the premise of Weird West by Wolfeye studios and the lovely people at Devolver Digital. Welcome to the wonderfully wild weird west. Grab your gats and party hats and head over to the salt flats.

Weird West puts you in a fictional version of the wild west era United States where the things that usually only happen in the Twilight Zone are commonplace and common knowledge. Things arcane and supernatural run wild and the residents of the land tread carefully. Right off the bat, you are privy to some sort of cult ritual in which several hooded figures are discussing the fate of some unknown person who is bound to a chair. Then they brand this person and the game starts. We wake up as a retired female bounty hunter who’s sleep is disturbed by gun fire. The Stillwater gang has paid a visit to her homestead, shot her young boy dead and kidnapped her husband. This sets our heroine on a blazing trail of vengeance to recover what is left of her family. This is just the first scenario the game places you in, more on that later.

As you traverse the Weird West you will come across people who may have jobs for you that pay good money. Good thing too, as ammo is not overly plentiful in the wild so paying for it is the best way to stay stocked. Your character has a community reputation. Some jobs may actually lower your reputation (like robbing graves for someone) and this can make dealing with townspeople difficult. Some story beats may place you in a position in which you may have to do something of ill-repute in order to get what you want. Luckily, in the Weird West, there is more than one way to skin a snake. Instead of taking the job, you could opt to sneak around the grounds of the lily-livered sidewinder who is withholding vital information and rummage through his personal effects to find what you need. Sometimes breaking the law is the only option and you have to pick your poison. The good news is, if a tree falls in the woods and no one hears it…..well you get the idea. If you break the law in front of upstanding citizens, you may have to do time in the local slammer and your rep takes a hit.

If you get into a firefight you may find yourself outgunned in the wrong situation. So Stealth is always an option. You can also hire or recruit gunslingers (up to 2 hired hands at a time) to your posse who will back you up in a tight situation. Speaking of a firefight you can carry several equipped weapons on you. A trusty six-shooter is the starting weapon but you can find rifles, shotguns, bow and arrows and if you run out of bullets, you can mele your way about with a hatchet, knife, club, shovel, just about anything you can get your hands on, even your own 2 hands but I wouldn’t recommend bringing a fist to a gun fight. Other items make themselves available throughout the story such as dynamite, Molotov cocktails and oddly, a taser. You can also blow up well placed barrels of TNT by shooting them.

There are so many ways to approach a given situation it certainly mixes things up from scenario to scenario or even on second playthrough. If you opt for guns blazing, make sure you get every last one of ‘em. If someone escapes, it can lead to a vendetta against you and that person could ambush you at any random moment with some hired help to take you down. Conversely, people you rescue in Weird West from some terrible fate can appear randomly during a firefight to back you up in order to repay their debt. Since this is the Weird West, encounters go beyond outlaws and cow-pokes. Magic users will also plague you during cave runs as well as wild animals, werewolves, zombies, sirens and Wendigo possessed treasure seekers to name a few. 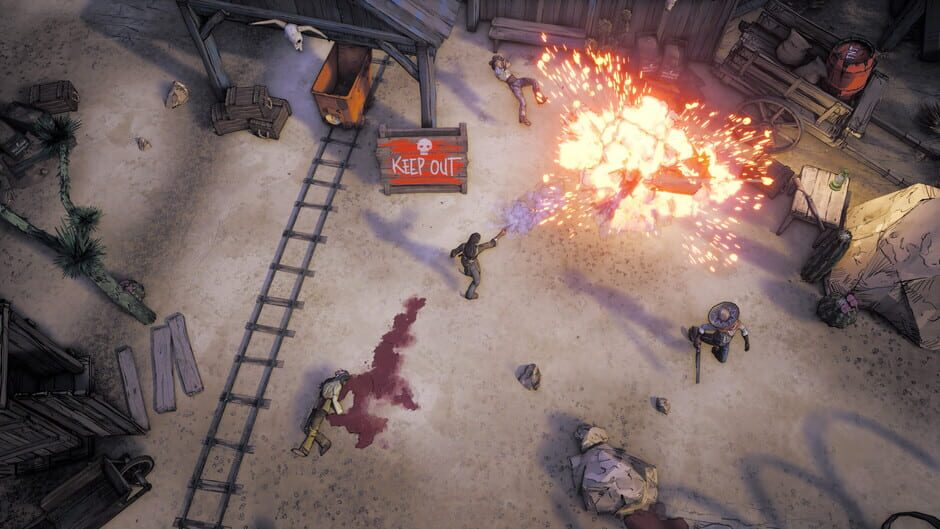 This action RPG gives each playable character (Scenario lead) a set of skills that can be learned and increased as you find certain items. There are active skills unique to each playable character and there is also a pool of community skills that pass on from one story to the next, like bullet time dodging or the ability to sneak around faster which give you a well rounded repertoire to work with. Controlling these characters and abilities is pretty simple, while this looks like it could be a point and click adventure like the Desperado series, it isn’t. A controller is very welcomed here for direct control in an overhead GTA type of game play. Aiming weapons is simple and you can see if you will hit a given target or not unless they are taking cover behind an object, which means you can do the same.

The sound design is fantastic. From the spoken dialogue to the small sound effects of a six-shooter reloading, Weird West does a fantastic job of immersing you in the aural experience of the old wild west. The acoustic guitar heavy soundtrack does a great job of setting the kind of atmosphere that gets your trigger finger nice and itchy. Graphically this game is excellent. You aren’t going to see any amazing 3d effects but what you get is well rendered characters and objects with excellent landscape detail and lighting. The story is told through detailed hand drawn stills that could have come right out of a comic book. The excellent narration accompanies the visuals to create some satisfying story telling.

As stated before, there are multiple storylines to progress through. Each one tying into the rest in its own piece of the puzzle. The second story is about a human trapped in a pigman’s body and how he fits into the larger overall puzzle of deceit and the supernatural. The same is done with other characters to tell an overarching tale of the Weird west. Different playable protagonists add a few different mechanics depending on the character type to keep the gameplay from feeling overly repetitive.

Weird West is a fun, creative and refreshing way to pass the time by putting a slug between the eyes of whatever unfortunate creature that crosses your path. While there are several games that attempt a similar feel and each pull it off in their own way, Weird West carves its own name in the tree stump of the video game realm as a formidable opponent. It’s rare that I have almost nothing but positives for any given game but I struggle to find any real gripes other than the occasional bug that sends a body flying into the sky or that it is too easy to fill up your inventory full of garbage items.  Outside of that, the entire package of storytelling, action and strategy is presented to you here on a silver platter. Dig in. Bon appetit.

Things I liked:
Just about everything

Things I would improve: